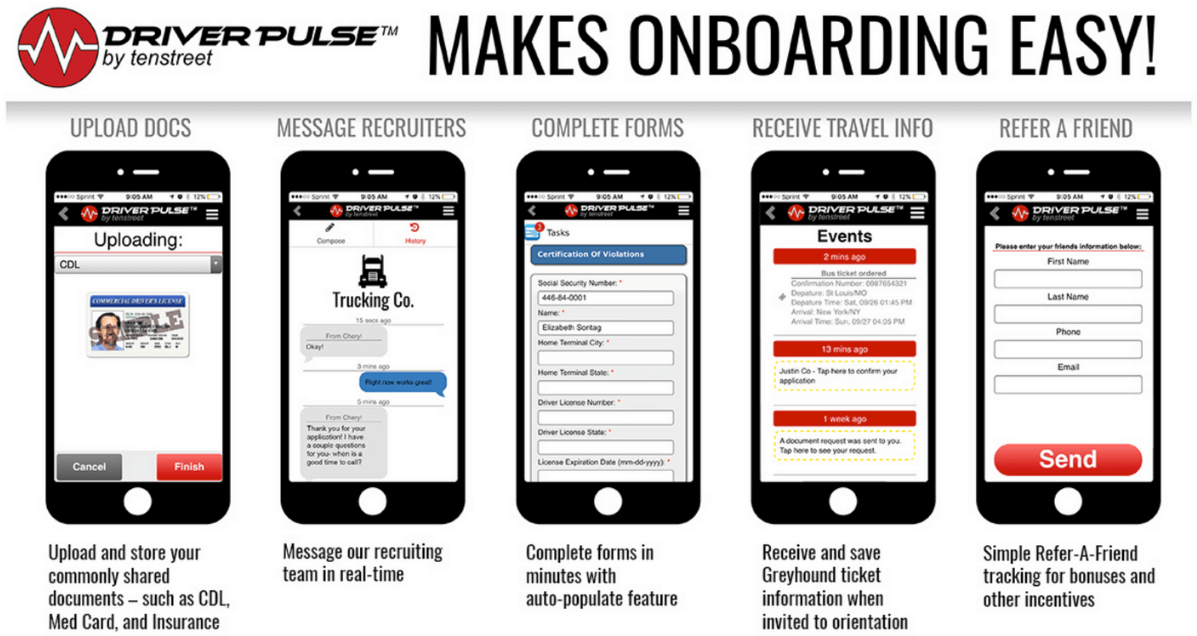 In light of the driver shortage, carriers need to stay connected with candidates more than ever.  75% of candidates apply to more than one carrier. The drivers need to keep track of the progress of multiple applications and are often left uncertain of details and next steps. That’s why we created Driver Pulse. It helps carriers stay in touch with candidates and enables drivers to track the progress of each application across multiple carriers. The result is better communication across the board between drivers and carriers.

The Driver Pulse App hit the Google Play and Apple App store in late August 2015. Today nearly 600 carriers can communicate with drivers via this new, free add-on to our platform, and over 10,000 drivers have downloaded it for free and are using it to make their job search easier.

The list of functionalities within the app is growing and includes a progress bar, “like” or “block”, and in-app messaging and more. The feature that receives the most raised eyebrows from carriers is the ability for drivers to block a carrier’s attempts to contact them. Drivers can block any carrier that they’ve submitted an application to. Why would they do this? Usually, it happens when drivers submit a multi-carrier application, not knowing which carriers will receive the application.

From a carrier’s perspective, this functionality may sound like a bug or downside of the app. In reality, though, if a driver blocks a carrier it sends a clear message. Prior to Driver Pulse, carriers had no way of knowing a driver’s intentions. Instead, recruiters wasted time leaving voicemails and sending emails, eventually giving up on a driver who was never going to work for them. Conversely, drivers can also “like” a carrier to indicate their interest. 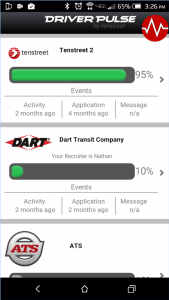 Drivers can see a progress bar showing each step in the process and their overall progress through the hiring process. This eliminates the need to call the recruiter to figure out where they stand. As progress is made, drivers receive push notifications to their phone.

Finally, drivers and recruiters can send messages back and forth between the Driver Pulse app and the Xpress system (or the Tenstreet dashboard app for recruiters). This feature has been used by 75% of Driver Pulse users.

In addition to managing the application/hiring process, drivers can now submit new IntelliApps to carriers they’ve applied to previously. To date, more than 10% of Driver Pulse users have submitted new apps via the Driver Pulse, resulting in several thousand IntelliApps being submitted to nearly 500 carriers.

This month or next, 50% of all IntelliApps will be submitted from mobile devices, so we’re bullish on the impact of the Driver Pulse app on the hiring process.

For clients who use Xpress to order Greyhound tickets, even that is integrated into Driver Pulse, so that the driver is only a few taps away from the ticket details (confirmation number, departure date/time, etc.)

Stay tuned, more drivers are downloading the app every day and we’re working on a long list of new Driver Pulse functionality!